Redox flow batteries (RFBs) offer an opportunity to make renewable energy storage more affordable and could accelerate prospects for utility-scale development of solar/wind energy storage. RFBs can be almost instantly recharged by replacing the liquid electrolyte. RFBs can be cycled more often and can lend themselves to 100% depth-of-discharge with no negative effects on performance unlike lead-acid and lithium-ion batteries with depths-of-discharge of 60 and 80%, respectively. RFBs can also last for decades (up to 25 years) before being replaced, making them promising for large utility applications, micro-grids and off-grid projects.

Attractive candidates for large-scale energy storage devices owing to its advantages in terms of cost, structural tunability, molecular diversity, and natural abundance. The operating cell voltages in aqueous redox flow batteries are limited to 1.23 V as beyond this voltage water electrolysis will be taking place leading to oxygen and hydrogen evolution. By contrast non-aqueous redox flow batteries can theoretically deliver the cell voltage up to 4V while utilizing stable organic solvents (e.g. acetonitrile, propylene carbonate and dimethoxyethane etc.) and suitable organic redox active couples. Apart from limited solubility, lack of high-performance membranes and low electrolyte conductivity, stability of constituent electrolyte materials is one of the major issues impeding the development of non-aqueous redox flow batteries. Both redox-active molecules need to be stable during charge-discharge cycling operations while being repeatedly oxidized and reduced with negligible degradation in performance. In this regard, stable anolytes are rare, primarily because of the low stability in the presence of oxygen and moisture. Our group is investigating the suitability of Diketopyrrolopyrrole derivatives as stable anolytes for all organic non aqueous redox flow battery.

2. Soluble lead redox flow batteries (SLRFBs) – present several advantages over competing flow battery systems. SLRFBs make use of variable oxidation states of lead. In its simplest form, Pb2+-ions are dissolved in a less toxic and cost-effective aqueous methanesulfonic acid medium as electrolyte that flows through the cells without expensive separators. There are, of course, challenges to surmount such as those related to phase changes at both the positive and negative electrodes. The major challenges are formation of Pb dendrites, PbO2 sludge, O2 evolution and shunt current effect in stacks. Our work is based on addressing each of these problems systematically by studying the effect of binary additives in the electrolyte and achieving extended cycle life of SLRFB. To bring the concepts into context, we have designed, developed and demonstrated the first-ever fully functional SLRFB stack (12 V / 250 Wh) comprising 8-cells with 500 cm2 electrode active area. Developing a stack has its own challenges, for example, occurrence of shunt current. We have studied the origin of shunt current and proposed a novel method to measure and minimize its effect on SLRFB stack. We are currently working towards scaling up the SLRFB technology to demonstrate 1 kWh stack. The studies in our group are primarily directed to propel SLRFBs from laboratory scale to a functional system by addressing key issues of scaling-up materials, fabrication and engineering. 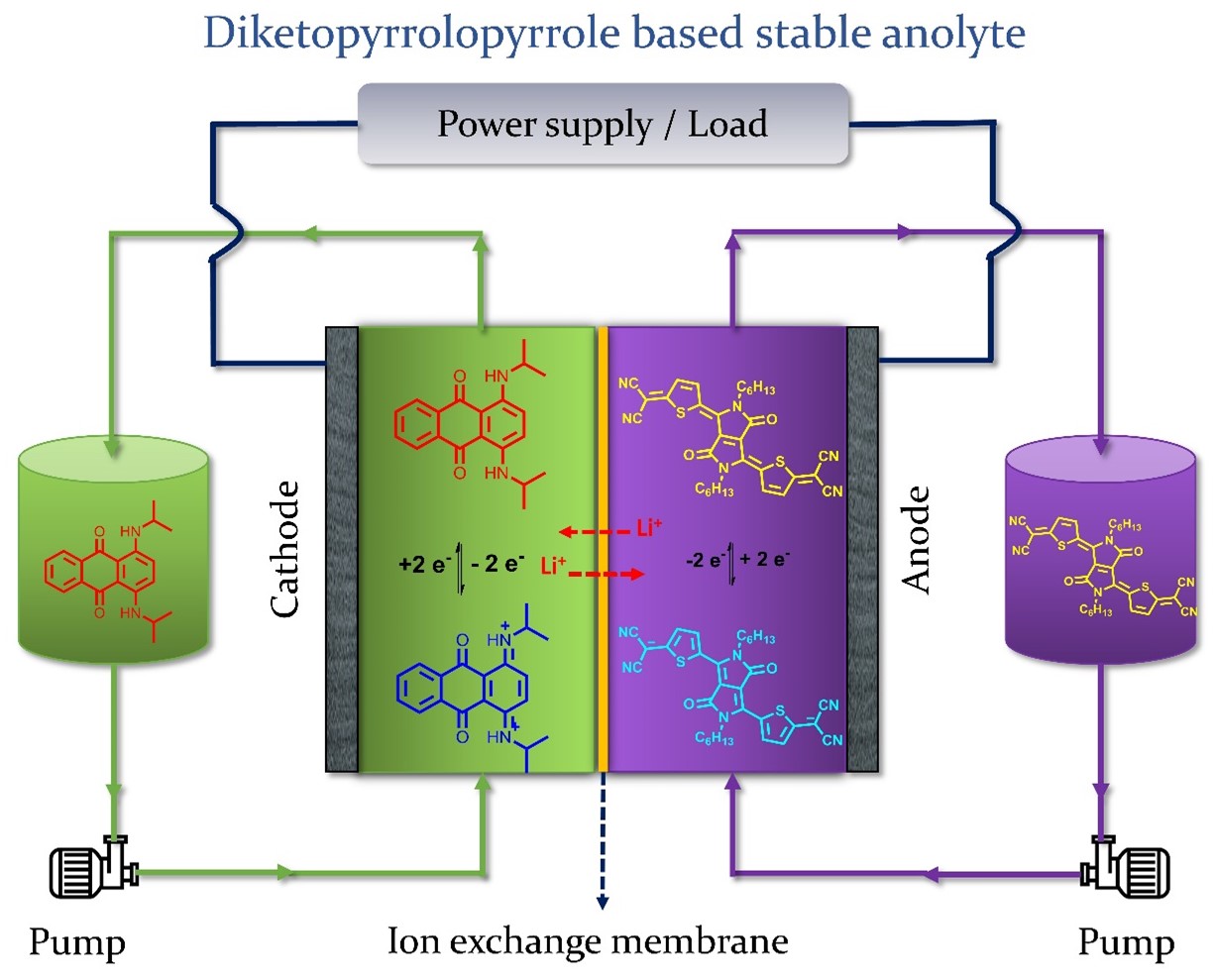 Schematic of an all-organic redox flow battery with Unisol blue and TDPP-Hex-CN4 as positive and negative electrolyte, respectively.